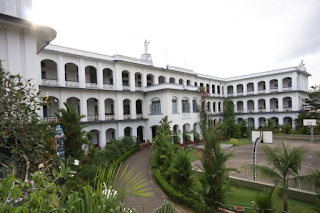 To love, to learn, to grow together.
We, as Heartians, have been doing exactly that.
Reciting our College Anthem opens up a whole new inspirational and motivational perspective among all of us. Personally speaking, the sail of our journey, the perils and turmoils of thunder and hail faced during our toughest times and the saviour represented through God's smile, is my favorite. The depth of emotion conveyed in those two lines left me completely spellbound.

Like the anthem says, our souls are enchanted as we pursue through our thoughts at the shimmering shores of time. The anthem inspires us to explore and gain knowledge from everywhere. It expresses how God's presence gives us the courage to move forward, like the tortoise in the story of The rabbit and the tortoise. It gives us the destination of the unknown freedom that is locked up in ourselves and to which we ourselves hold the key, to be opened when we stand up for ourselves with God as our treasured compass.

Rarely have I read a piece of writing that made me feel that even climbing the highest of peaks, swimming the longest rivers, writing the biggest novels, or the most meaningful poems, all the tough moments, to be the happy pills of life that we can achieve if we dare to dream of it and follow God's path and vision of grandeur and love.

I feel that I deeply owe a lot to every esteemed person who made a contribution in making this College Anthem. It is a brilliant piece of writing that should break off from being a cocoon and fly like a butterfly to spread its message to the whole world.
Posted by Heart-Bytes at 23:52 No comments:

Being a pioneer and promoter of sports right from its founding, Sacred Heart College attempts to integrate a sense of sportsmanship in young minds and firm their talents for National and International exposure. Past experiences assert that Fr. Bartholomew memorial tournament with its hallmark of maximum participation from all over Kerala, has turned out to be an innovator in and around Kochi, bringing into limelight many of the sporting prides of India.
Fr. Bartholomew memorial tournament was established by Sacred Heart College to perpetuate the memory of Rev. Fr. Bartholomew, a true lover of sports and games was the prior general of the Carmelites of Mary Immaculate (CMI).
The tournament started in 1945 featuring, Basketball, Volleyball and Ball Badminton, particularly for men. Volleyball for women was introduced in 1950 as part of the five-year anniversary, Basketball for women, in 1972 and Volleyball for women became part of the tournament in 1995. As a part of the platinum jubilee celebration of the college, Handball for men also established in 2019.
Since 1945, the tournament is self-perpetuating and it is the oldest inter-collegiate tournament in Kerala. The 75th edition of Fr. Bartholomew All Kerala Inter-Collegiate tournament hosted by Sacred Heart College, Thevara, was held from 14th to 17th Feb 2020. The platinum jubilee logo was released by Actor Jayasurya and Vijay Sakhare, Inspector General of Police. The tournament was inaugurated by Rev. Fr. Augustine Thottakattukara, manager of Sacred Heart College. The tournament comprised Basketball, Volleyball, for both men and women and Handball and Ball Badminton for men.
The conduct of Fr. Bartholomew memorial tournament for the last 75 years without a break is a graceful reference to the enduring sporting dedication of Sacred Heart College, Thevara. This year 45 teams participated in the inter-collegiate tournament, out of that Sacred Heart College emerged as winners in Handball for men and runners-up in Volleyball for men, in both of the disciplines Sahrdaya College, Chalakudy was the runners-up and Ideal College, Kuttiadi became the winners respectively. For men’s Basketball, Mar Ivanios College, Trivandrum became the winners followed by SB College, Changanassery, who were the runners-up and for Ball Badminton, S. N. College emerged as the winners and NSS College became the runners-up. For women’s Basketball, St. Joseph’s College, Irinjalakuda came out as the winners and Assumption College, Changanassery became the runners-up and for women’s Volleyball, Alphonsa College, Pala, set off as the winner followed by St. Xavier’s College, Aluva, the runners-up.
Posted by Heart-Bytes at 07:56 No comments: 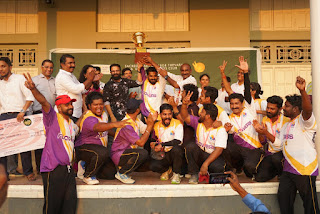 The Lakeview ground of SH College Thevara woke up with strikes from Bats’ and cheering crowds recently as it became a venue to host a sensational cricket tournament exclusively for media people belonging to different media outlets. The ‘SH Media Cup’ Cricket Tournament was jointly organized by the Thevara Sacred Heart College and the Ernakulam Press Club on behalf of journalists commenced on February 1st and ended on February 3rd . Former Indian player Tinu Yohannan inaugurated the event on 1st February and expressed his sincere gratitude towards inviting him for the tournament. He says," Tournament such as this gives an opportunity for the reviewers of the game to understand what we face on the ground, such competition will surely give space for unity in a highly competitive industry." The tournament is part of the college's Platinum Jubilee Celebration and the Golden Jubilee of the Ernakulam Press Club.
fter the first and second match, the respected winners moved on to the quarter finals. The quarter finals were between Mathrubhumi and zee Kerala followed by Flowers TV and Times of India where Mathrubhumi and flowers were qualified to play the semi-finals. The semi-finals and finals were conducted on February 3rd.
In the finals Flowers TV scored 102 in 6 over’s and MMTV could only manage 86 runs in their innings. Actor Jayasurya gave away the winner’s trophy along with Kochi Police Chief IG Vijay Sakhare to the Flowers TV Team members. They also received a cash award of Rs 50,000 sponsored by Bank of Baroda. The MMTV won the runners up trophy along with a cash award of Rs 30,000 sponsored by DBFS.
An exhibition match was also held between Kochi City Police Officials Team and Ernakulam Press Club Team, despite actor Jayasurya conceding a lot of runs in an over. The media team trumped the police team to win the exhibition match with five balls to spare chasing 64 runs in six over’s. IG Vijay Sakhare scored the highest for the Police team. Sub-Collector Snehil Kumar was also part of the Police team along with Deputy Commissioner G Poonguzhali IPS who was the sole women representative in the entire tournament.
Posted by Heart-Bytes at 07:59 No comments: 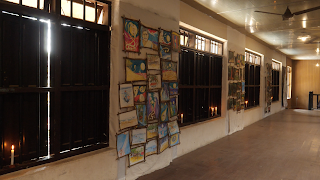 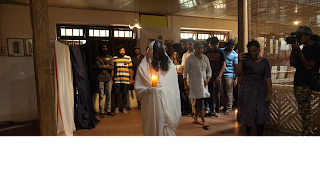 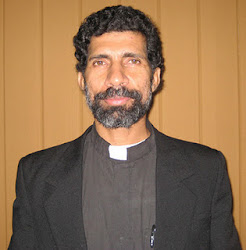 The possibilities that a weblog opens up for learning, creativity, self-expression, mutuality, solidarity, and self-discovery are truly mind blowing (or should I say, mind blogging?)!

As blogs enter into a second decade of increasing popularity world over, the Heartians have decided to keep the log with active involvement of the student community. On the side of the faculty, there is no dearth of initiative; but it does require the youth energy to keep it going. I hope this will serve heartian academic fellowship beyond classrooms and national boundaries - taking the bloggers 'into that haven of freedom' of right thought, right speech and right livelihood. I am happy to assert with the heartians world over, that from now on - WE BLOG'!